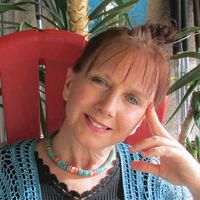 Lorrie Sarafin spent over 10 years in the broadcasting world in the New York Metro area before moving to the southwest in the early 1990's.  After hearing R. Carlos Nakai in 1993 she bought her first flute and took it out into the Sonoran Desert on her many hikes.  She is fond of saying the wind and nature are her teachers.  Sarafin has released two music CD's - one of which was voted number one (MANY PATHS) by broadcasters across the United States.

While out hiking Sarafin took hundreds of photos of the beauty and mystery of the desert - and also experienced some very awe-inspiring events. Her debut book BEAUTY WHISPERS documents this journey and has received several positive reviews.

I'll be playing my Native Flutes before the main event - David Paulides NEW movie "Missing 411 the UFO Connection." This is a private event and I thank Mr. Paulides for the invite to perform.

Pre-meeting mini-concert in the Lobby. Phoenix Mufon's Speaker will be David Hatcher Childress - his talk on Antarctica and the Secret Space Program should be highly enlightening! Listening to the music is free but Mufon will be charging $15 (cash only) to hear the speaker. Concert: 11:30 AM to 12 Noon. Speaker Event: 12 Noon to 3 PM. Hope to see you there!